The IDEA State Complaint Resource Center is your guide to effective state complaints, one of the dispute resolution options under the Individuals with Disabilities Education Act (IDEA). 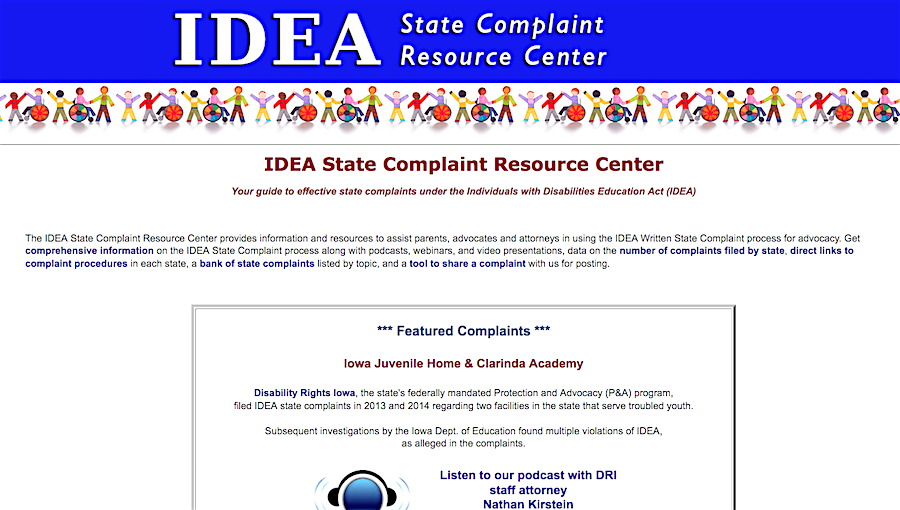 The IDEA State Complaint Resource Center is designed to provide parents, advocates and attorneys with information and resources to assist in using the State Complaint process effectively.

We believe the IDEA State Complaint process is underutilized as a tool for improving the compliance and quality of special education programs. The number of written state complaints filed has declined by 15 percent between 2005-2006 and 2010-2011 according to data compiled by CADRE. Yet State Complaints are the only avenue for addressing systemic issues of noncompliance.

When issuing the IDEA Federal regulations in 2006, the U.S. Dept. of Education noted the usefulness of state complaints.

“Through its Part B State complaint procedures, each State has a powerful tool to address noncompliance with Part B of the IDEA and its implementing regulations in a manner that both supports and protects the interests of children and their parents and facilitates ongoing compliance by the State and its public agencies with the IDEA and implementing regulations” (Source: 71 FR 46601 August 14, 2006).

At this State Complaint Resource Center you can Share a Complaint

Or, Spread the Word about this Resource Center with others.

Want Systemic Change? Use the State Complaints Provisions Under IDEA

Writing the Due Process Letter or State Complaint

If you file a State DOE Complaint, does that remove your right to file due process? As an advocate, a client was told by an attorney that she could not file due process because she had filed a complaint with the State DOE.

If your request during due process is for private school placement at the public expense, and you are following the procedural safeguards, does the requirement to notify the school in writing 10 days prior to withdrawal include, a written notice 10 days before you apply to the private school?

What are some examples of substantive FAPE violations/issues?

To answer your question: 1) Not completing an individualized assessment
2) Failing to Address All of a Student’s Needs in the PLAAFP
3) Failing to Write Ambitious, Measurable Goals
4) Failing to Monitor Student Progress
The Present Levels of Academic Achievement and Functional Performance statement (PLAAFP, or “present levels”) is a key part of your child’s Individualized Education Program (IEP). Definition came from parent companions

You can always check here about violations or do a google search.

My grandson was born and diagnosed in the NICU with Septo optic dysplasia. He is legally blind, has patituitary gland dysfunction so he is cortisol dependent, doesn’t make thyroid or growth hormone. He was diagnosed later at age 4 with autism. Recently he was diagnosed with ADHD. ON his IEP he has vision, speech and autism listed. He has been assigned a para- professional due to behavioral issues and the lack of fine motor skills. He also has a BIP and is scheduled to go for sensory breaks.

An ARD had to be called to make a decision on multi- disabilities when I questioned it. He is already been diagnosed with intellectual disability and qualified for HCS waiver services. The ARD refuses. I talked to director who refused as well.

It is not clear what the team, & director are refusing to do. If it is about using the label, multiple disabilities, the important thing to remember is that the federal rules say that no matter what label(s) are used all of the child’s must be identified & addressed in the IEP. I work for the TX parent training & information center. If you go to http://www.prntexas.org/ you can find our staff person that works with the area you live in.

It is the label multi-disabled. I do not understand what difference checking this box means one way or another.in my child’s educational needs and goals. The determination has been made but I consider him to be and wonder why the district is so adimmate in their decision against it. Thank you for the link. That will be very helpful.