Wrightslaw is live blogging from the Institute of Special Education Advocacy (ISEA) all week. We hope you will join us!

Welcome! Six sessions are scheduled today. We are updating the blog during and after each session, so check back often. 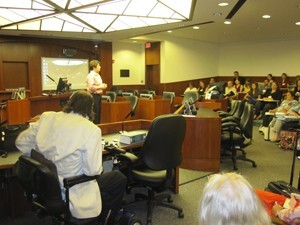 9:00 am. Patty Roberts, Director of Clinical Programs and Supervisor of the PELE Special Education Advocacy Clinic at William and Mary, opened ISEA 2012. 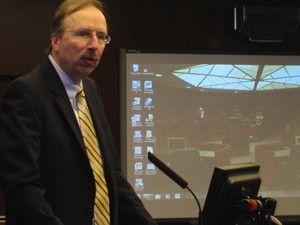 9:05 am. Davison Douglas, Dean of the William & Mary Law School welcomed the ISEA participants. He noted that several traveled long distances to attend – from California and Alaska – and expressed the hope that they are not seriously jet-lagged.
Dean Douglas is the author of several books on Civil Rights Law and has a special interest in special education matters. He spoke about the urgent need for advocates who can help parents obtain appropriate services for their children with special education needs, and thanked participants their commitment to this field. 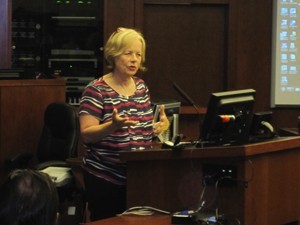 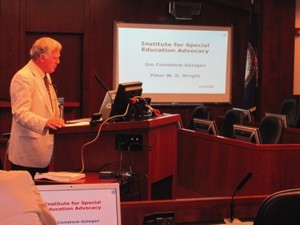 9:45 am. Pete Wright and Jim Comstock-Galagan began their joint session on history and relevant law.

To understand the battles being fought today for children with disabilities, you need to understand the history and traditions associated with public schools and special education. During the early 1970s, two cases were catalysts for change: Pennsylvania Assn for Retarded Citizens v. Commonwealth of Pennsylvania (PARC) and Mills v. Board of Education of District of Columbia.

Pete described the forces that led Congress to enact Public Law 94-142, including two legal decisions: Pennsylvania Assn for Retarded Citizens v. Commonwealth of Pennsylvania and Mills v. Board of Education of District of Columbia. These cases dealt with the exclusion of children with disabilities Over the years, Public Law 94-142, which was enacted in 1975, was renamed and is now known as  the Individuals with Disabilities Education Act.

Pete described the Findings and Purposes of the IDEA statute, and emphasized that the law was enacted to meet two goals:

Pete also discussed Response-to-Intervention (RTI) and the Procedural Safeguards that are intended to  protect the rights of children with disabilities and their parents, including due process hearings and appeals. He advised participants to read the McKinney-Vento Homeless Assistance Act that requires school districts make decisions in the “best interest of the child.”

An Amazing Journey: Things You Can Do Under Section 504 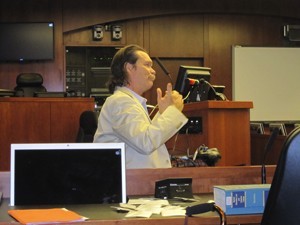 10:45 am. Jim Comstock-Gallagan discussed Section 504 and the Americans with Disabilities Amendments Act of 2008 (ADAA).

He noted that the recent amendments to Section 504 and the ADAA greatly expanded coverage under Section 504/ADA. The ADA Amendments Act, Public Law No. 110–325 (2008), overturned Supreme Court precedent that narrowed coverage under the ADA and Section 504. The reauthorized law provided that impairments should be considered in their unmitigated state and widened the definition of major life activities set out in the statute’s coverage provision.

As Jim discussed ways to use Section 504, he recommended that ISEA participants read A New Look at Section 504 and the ADA in Special Education Cases by Mark C. Weber.
http://apps.americanbar.org/litigation/committees/childrights/content/articles/summer2011-section-504-ada-idea.html

In that article, Professor Weber wrote,

“Section 504 forbids disability discrimination by federal grantees, including local school districts; Title II forbids disability discrimination by state and local governments, again including school districts. The regulations promulgated to enforce section 504 require that all children with disabilities, as defined by section 504 and the ADA, be provided with free, appropriate public education as interpreted by the section 504 regulations. (34 C.F.R. § 104.33(a)). That entitlement does not hinge on IDEA eligibility.”

Jim noted that historically, Section 504 has been used to supplement IDEA for compensatory damages, but there has been very little litigation under Section 504 in other areas.

Jim advised the group that the definition of “free appropriate public education” is different under Section 504 than under IDEA. The question that must be asked and answered is this: “Are the needs of the disabled child or children being met as adequately as the needs of nondisabled children?”

Jim said, “I believe FAPE under 504 goes further than FAPE under IDEA.” He used the example of graduation rates. “Assume the overall graduation rate in your State is 72%, but the graduation rate of kids with disabilities who are not intellectually disabled is 52%. So, twenty percent fewer kids with disabilities graduate with a high school diploma. Are the needs of disabled children being met as adequately as the needs of nondisabled children? If they are not, aren’t these children being discriminated against as a result of their disabilities?”

“This is a powerful argument that is not available under IDEA.”

“Perhaps we’ve been so focused on meeting the individualized needs of kids w disabilities that we may be missing the forest for the trees.”

Expulsion is a change of placement. If the child’s behavior is related to disability, the school cannot suspend the child or terminate services.

In discussing intentional or unintentional discrimination, Jim described a recent complaint filed with OCR that was based on title VI and Section 504/ADAAA. The complaint focused on dramatically different discipline rates and referral rates to alternate schools.

504 opens up other issues, including restraint and seclusion.

“Restraint and seclusion policies only apply to kids with disabilities. Shouldn’t these policies apply to all kids?”

“If I’m a 504 kid, I’m entitled to a free appropriate public education as it is defined under Section 504. Since restraint and seclusion policies only apply to kids with disabilities, I want to be treated as a nondisabled kid.”

“The key is equal treatment. If a school uses restraint and seclusion, this has to apply to everyone.”

On May 15, 2012, the U. S. Department of Education issued a “Resource Document” that discourages schools from using restraint and seclusion.

“The Resource Document includes 15 principles that highlight how school behavioral interventions can educe or eliminate the use of restraint or seclusion. These principles offer states, districts and other education leaders a framework for developing appropriate policies related to restraint and seclusion to ensure the safety of adults and children.

The Secretary of Education, Arne Duncan said, “Ultimately, the standard for educators should be the same standard that parents use for their own children. There is a difference between a brief time out in the corner of a classroom to help a child calm down and locking a child in an isolated room for hours. This really comes down to common sense.”

12:00 – 12:45 pm. Breakout sessions on Legal Research for attorneys and experienced advocates, and for advocates who need direct instruction. 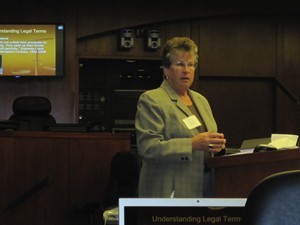 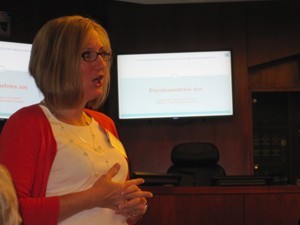 3:15 pm. Dr. Beth Heller from Virginia Commonwealth University was up next. She presented Understanding Tests and Measurements: Psychometrics 101.

Why do we use tests to measure? We want to :

“Accurate interpretation requires that we tell the whole story.”  She demonstrated how accurate scaling of test scores is essential with examples of how test data is used inappropriately.

We hope you will join us as we continue live blogging from the Institute on Tuesday, July 24. Five sessions are scheduled. Special education advocates who are interested in organizing are invited to meet during lunch tomorrow.

This is a great post for all parents with an IEP. When we were in our third or fortuh year of IEPs we had a change of administration with the school and the new IEP Team was being difficult to work with. We extended our meeting because of an impasse. We arrived at the next meeting rolling in a stack of boxes three feet high filled with paperwork from past meetings. We had homework assignments, report cards and every piece of communication and the IEPs on top. When we started to lay it all out on the table they quickly changed their attitude and we got the services we wanted with almost no fuss. Having this kind of ammunition may be part bluff but it actually works.

https://www.facebook.com/AutismSchoolBattles?ref=notif&notif_t=page_new_likes
A place to share info. You guys are a great resource, thanks for all you do!

I have 2 complaints filed with the OCR/DOJ. They are almost 2 years old. I have been told that the status is still pending. What should I do?

Thanks, Cheryl. Sorry for the delay answering. The Institute was incredible, the setting (Moot Courtroom) was inspiring, and the speakers were so good and generous with their time and knowledge. We are looking forward to next year!

Hello Everyone:
As an attendee of the event last year, I am so glad to see that the institute has, and will continue to thrive. My attendance at the institute last year not only provided me with valuable information, but I also allowed me to develop some life long friends who I still stay in contact with and share resources with.
Tell everyone I said hi!
Happy Advocating !