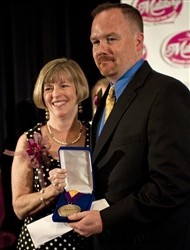 Jeremy has championed the progression of disability policy and the exceptional family member program for military families.

Upon receipt of the award, Hilton, who has a daughter with special needs, lauded fellow finalists from the other services, and shared what also inspired his efforts to advocate for military families impacted by illness or disability.

Hilton explained that any type of family is subject to facing the challenging circumstances brought on by illness, injury or genetic aberration.

“For some, this will happen in a split second, whether from an (improvised explosive device) or from the doctor telling you that something is wrong with your baby,” Hilton said. “For others, it will be the shocking realization of the road you’re about to travel as you deal with your (multiple sclerosis), cancer or Alzheimer’s.”

The Military Child and Special Education at https://www.wrightslaw.com/info/mil.child.sped.exc.parent.pdf

The Exceptional Advocate at  http://apps.mhf.dod.mil/efmp/book/2012/May/