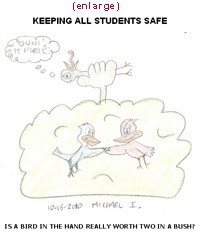 by Tricia and Calvin Luker, www.ourchildrenleftbehind.com

Earlier this year, Congressman George Miller introduced and championed the “Keeping All Students Safe Act” in the House of Representatives. Miller’s bill took substantial steps to eliminate the use of restraint and seclusion in our schools. The bill passed and was sent to the Senate.

The Senate version of the “Keeping All Students Safe Act” (S.3895) is significantly different from the House bill, and includes a  provision that is creating substantial controversy. The controversial provision would allow schools to … include seclusion/restraint plans in Individualized Education Programs (IEPs), safety plans, educational plans, and behavior plans.

The IEP describes the child’s special education program, and sets forth the services the child will receive. Special education is defined as “specially designed instruction … to meet the unique needs of a child with a disability …” 20 USC 1401(29)

We oppose a bill that includes the “IEP provision” for several reasons:

We are also concerned that an IEP provision will provide a legal basis to condone and promote the use of dangerous practices that – according to Congress — have no educational or therapeutic value.

This Bird in the Hand is Not Acceptable

Some organizations have indicated they will support the bill, with the IEP provision, because they hope other provisions in the bill may protect students.

Other organizations – including Wrightslaw and Our Children Left Behind – say the IEP provision is fatal to the bill. We cannot accept legislation that will permit the planned use of seclusion /restraint by including it in the IEPs of children with disabilities, and other similar plans.

In this case, a bill that was originally intended to protect children from harm would have the unintended consequence of legitimizing seclusion and restraint, causing harm to vulnerable children.

This is the Bird in the Hand and it is not acceptable. If this bill is enacted, it will be too late to “fix things” later. The damage will be done and our children will suffer for it.

You can read the full text of “Is a Bird in the Hand Really Worth Two in a Bush?” at http://www.ourchildrenleftbehind.com/