Update: On March 22, 2017, the Supreme Court in Endrew v. Douglas County unanimously rejects the “de minimis” standard for one that “is markedly more demanding than the ‘merely more than de minimis’ test applied by the 10th Circuit.” In his opinion, Chief Justice Roberts says “a student offered an educational program providing ‘merely more than de minimis’ progress from year to year can hardly be said to have been offered an education at all.”

On Wednesday, January 11, 2017, the U. S. Supreme Court heard oral argument in Endrew F. v. Douglas Co. Sch. Dist., a case about educational benefit and FAPE. Pete and Pam attended and will share their thoughts below.

“The justices were dissatisfied with the U.S. Court of Appeals for the 10th Circuit’s ruling that school districts can satisfy federal education law as long as they offer a student with a disability an educational program that provides him or her with a benefit that is more than merely de minimis, or non-trivial.”

“It was less clear exactly what standard (if any) the justices might substitute for the “more than merely de minimis” standard, but a standard “with bite” – as Justices Ruth Bader Ginsburg and Elena Kagan put it – would be a welcome development for children with disabilities and their parents.” 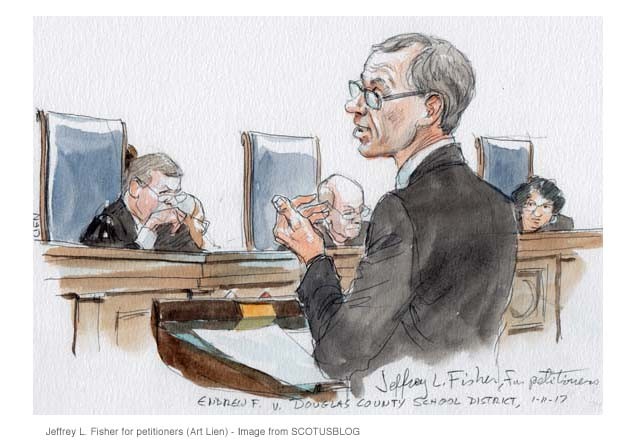 The attorney who represented Drew suggested this standard: “A student’s IEP should generally be tailored to achieve a general educational curriculum at grade level; if that is not possible, the IEP should use alternative benchmarks that are ‘the highest possible achievable by the student.'”

The attorney who represented the school district claimed that Courts have used the “more than merely de minimis” standard for decades and recommended keeping that standard.

The Solicitor General, speaking for the United States government, offered a higher standard for a free appropriate public education: that the school must offer “… a program that is aimed at significant educational progress in light of the child’s circumstances.”

Our take? All the special ed lawyers we talked to felt positive about the tone and statements during oral argument. They thought the justices recognized the problems with the current de minimis standard and felt they would come up with a new improved standard.

If you are interested in a more comprehensive article about oral argument, we recommend this excellent analysis by Amy Howe, reporter at Scotusblog: Justices grapple with proper standard for measuring educational benefits for children with disabilities.

For those who want to learn how the oral argument unfolded, here is a link to the transcript. 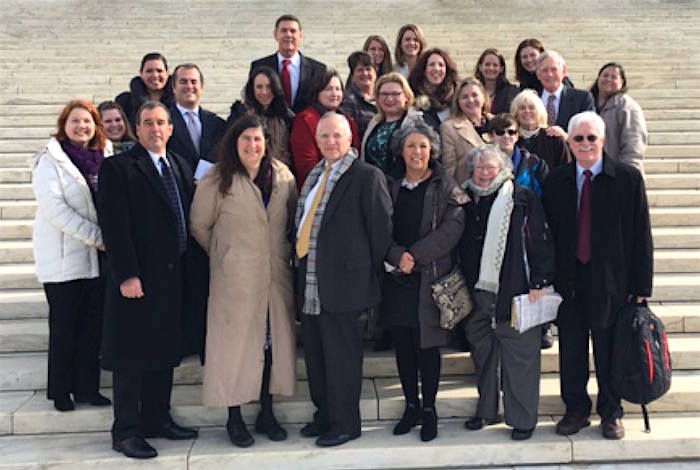 Pete and Pam with other COPAA members at the Court after Endrew oral argument.