** New York Times Critics Pick** “No matter how fondly you recall your time at sleepaway camp, chances are your experiences weren’t as formative as the ones recounted in “Crip Camp: A Disability Revolution,” a documentary streaming on Netflix,” writes Ben Kenigsberg, New York Times. 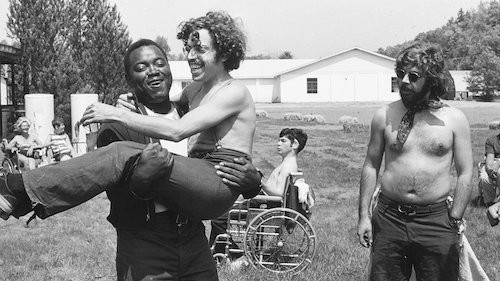 A photo taken at Camp Jened. The camp is the subject of the documentary “Crip Camp: A Disability Revolution.” Credit…Steve Honigsbaum/Netflix

“Crip Camp: A Disability Revolution” tells the story of a summer camp for teenagers with disabilities in the 1970s. The camp brought people together who would energize and lead the movement for civil rights protections for themselves and for those who would follow them.”

“’Crip Camp’ draws extensively on terrific contemporaneous black-and-white footage shot by a collective called the People’s Video Theater, for which participants were invited to speak their minds. But even more than those activist videos, “Crip Camp” unfolds from a perspective of lived experience.”

“Several Jened alumni became nationally visible activists and resettled around Berkeley, Calif. Judy Heumann had sued for discrimination in New York after she was denied a license to teach and became a leader in San Francisco in the 504 Sit-In of 1977, when activists demanded federal regulations guaranteeing civil rights for the disabled.”

“Ultimately, ‘Crip Camp’ has a universal message: Inspirations that begin in youth can lead to radical, world-changing results. At the end, a number of former campers reunite at the camp’s unprepossessing present-day site. They see something more, and so will you.”