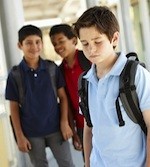 A special education teacher asked a question about a student’s right to confidentiality after being disciplined by the school.

It is a good example of how changing the facts in a particular situation can give you a clearer perspective on the issue.

“…a child with disabilities was a victim of bullies. How much is too much information to share with another parent regarding other students..before turning the bullies into victims?”

We had a situation this year with a child with disabilities who was a victim of bullies. The bullies faced consequences including parents being called.

The parent of the child with disabilities wanted to know who the bullies were, what consequences were given, and what the meeting entailed with the parents of the bullies. Is this allowed? It felt like the bullies were now being turned into victims.

We have a clear and zero policy in our school regarding bullies. I was satisfied with the consequences given. How much is too much information to share with another parent regarding other students?

Let’s change the facts in this case. The child with disabilities who was bullied is your child. What’s your perspective, now?

Camp officials decline to release info about the aggressor and what steps, if any, were taken.

What is your position as the parent?

You want to press charges against the aggressor, but the private school cites confidentiality and refuses to release any information about the aggressor, including his identity.

Should you be notified?

In those scenarios and with a public school, when any entity refuses to release information to a parent, what does the parent automatically assume? They assume that the other child is being protected, despite being the bully.

Parents have a right to know who did what to their child and what steps, if any, the school took to prevent a repetition of it. Anything less is viewed as a cover-up and opens school up to the appearance of a policy of “doing nothing” to protect children from bullies.

In Bullying, Confidentiality, & the Parents’ Need to Know, Pete and Pam answer questions about confidentiality and the parents’ need to have information about their child. Pam suggests a strategy to help the teacher understand the parent’s perceptions, concerns, and fears.