In November, the U.S. Commission on Civil Rights released the 2019 Statutory Report. 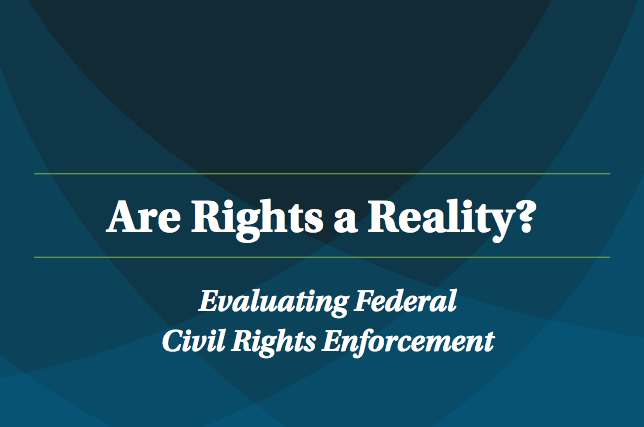 Regarding enforcement, some of the enforcement tools ED OCR has specific legal authority to use are:

This chapter discusses the concern over funding and staffing decreases while complaint numbers have increased.

“In its FY 2016 annual report, ED OCR stated that its general staffing level has historically decreased over time, despite the fact that its complaint volume has ‘exponentially increased.'”

At the Commission’s briefing, Executive Director of the National Disability Rights Network Curt Decker testified regarding these reductions.

In Chapter 3, you will find discussion and charts regarding the ratio of Staffing Levels vs. Complaints received.

There could be concerns “that an increasing workload combined with decreasing resources ‘could have a negative effect on complaint resolution,’ because staff may not be able to maintain their levels of productivity.”

“According to the figures ED OCR reported to the Commission, in FY 2016, the largest number of complaints received (7,072) were Title IX complaints (regarding sex discrimination), which coincides with the information presented in the FY 2019 Budget Request that reported a single individual who filed 6,201 Title IX complaints against elementary and secondary schools and school districts.”

“In FY 2017, the largest number and percent of complaints received (5,569/43.4percent) were complaints alleging discrimination against individuals with disabilities.”

Chapter 3 discusses of the number and types of complaints received and the resolution statistics as to complaints closed or still pending.

During the time period studied in this report, ED OCR resolved thousands of cases of allegations of discrimination, including:

The Report also discusses the “Dissemination of Policy Through Guidance, Regulations, Technical Assistance,” as well as rescinding previous guidance.

“The Commission has found that they [policy guidance] are an important tool for effective civil rights enforcement.”