Supreme Court to Decide Damages Case Brought by a
(Former) Child with a Disability
by Pete Wright & Pam Wright
Wrightslaw.com

On January 18, 2023, with Pete and Pam in attendance, the Supreme Court heard Oral Argument in the unusual case brought by Miguel Luna Perez, a 23-year-old deaf man who filed a lawsuit against his school district for compensatory damages under the Americans with Disabilities Act.

This appears to be the first case brought by a former student on his own behalf.

The lower courts dismissed Miguel Perez's case because he failed to "exhaust his administrative remedies," although attempting to exhaust them would be "futile" because compensatory damages are not available under IDEA.

Perez v. Sturgis is also unusual because it re-opens the issue of exhaustion of administrative remedies before filing a lawsuit in federal court. The issue of exhaustion of administrative remedies in IDEA cases was the essence of the 2017 Supreme Court decision in the Fry v. Napoleon case. Five years after the decision in Fry, SCOTUS agrees to hear another exhaustion case, possibly to clear up lingering confusion around this issue. 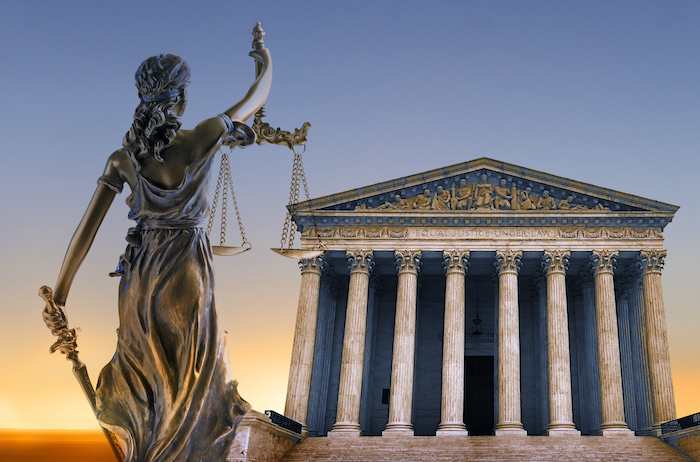 In 2004, the Perez family immigrated to the United States and settled in Sturgis, a city in St. Joseph County, Michigan.

When Miguel Luna Perez enrolled in Sturgis Public Schools, he was a nine year old child who was deaf. His parents spoke Spanish so they needed an interpreter to communicate with school personnel who were not fluent in Spanish. IDEA requires schools to "take whatever action is necessary to ensure that the parent understands the proceedings of the IEP Team meeting, including arranging for an interpreter for parents. . ." who are deaf or do not speak English. (34 CFR § 300.322(e). Although Miguel's parents didn't speak English, Sturgis did not provide an interpreter, so the parents could not participate in decisions about their child's education.

The aide worked with Miguel for more than a decade. He did not learn to read and write. The aide was his only communication facilitator from 2006 to May 2016. When the aide was assigned to work with other students, the school placed Miguel in "web-based learning" although he couldn't use online instruction because he didn't know how to read or write.

For twelve years, Miguel was not able to communicate with his teachers and classmates. He couldn't ask questions and get answers. He couldn't have personal relationships with his teachers and his fellow students. He had no friends at school. He wasn't able to participate in extra-curricular activities. Miguel was completely isolated which caused him severe emotional distress, humiliation, frustration, anxiety, sadness, and hopelessness.

Although Miguel could not read, write, or communicate, he received As and Bs. He was on the Honor Roll every semester. Because the school district inflated his grades and misrepresented his educational progress, Miguel and his parents believed he was on track to earn a high school diploma when he completed 12th grade.

A few weeks before graduation, school officials advised Miguel and his parents that he would not graduate with a diploma but would only receive a "certificate of completion."

Due Process Hearing and Settlement of IDEA Claims

In 2017, Miguel Perez and his parents requested a special education due process hearing against Sturgis School District, alleging violations of IDEA, Section 504, the ADA, and state laws and compensatory damages.

In June 2018, Miguel and his family entered into a settlement with the district that resolved their IDEA claims.

"Under the settlement, respondents agreed to pay for petitioner's attendance at the Michigan School for the Deaf, any post-secondary compensatory education, sign-language instruction for the petitioner and his family, and the family's attorneys' fees."

The Administrative Law Judge dismissed the Perez's IDEA claims because of the settlement. He also dismissed Miguel's ADA claim.

In December 2018, Miguel Perez filed suit in federal court, seeking compensatory damages under the Americans with Disabilities Act for the school district's failure to provide the resources he needed to participate fully in his classes.

The district court dismissed Miguel's ADA suit because he settled the IDEA claims before going through IDEA's administrative procedures (due process hearing).

A Word or Two About "Exhaustion of Administrative Remedies"

What does the term "exhaustion of administrative remedies" mean? The answer will depend on the law in the plaintiff's circuit but in general, it means parents / plaintiffs must request a special education due process hearing and go through the hearing until a final decision is issued. After the independent hearing officer or Administrative Law judge issues a final decision, the parents / plaintiff can file suit in court.

If IDEA cannot provide the relief the plaintiff seeks (i.e., monetary damages are not available under IDEA), the plaintiff can file suit in federal court and bypass the requirements for exhaustion of administrative remedies.

Miguel Perez Appeals to the Court of Appeals

Miguel appealed the adverse decision to the U.S. Court of Appeals for the Sixth Circuit. In a split decision, the three-judge appeals panel upheld the district court.

Two of the judges on the panel held that "the gravamen of the ADA complaint" was that the school district violated Miguel's right to a FAPE under the IDEA by denying him an appropriate education. "Although the petitioner sought only compensatory damages' on his ADA claim - a remedy that is unavailable under the IDEA - the choice of a remedy makes no difference."

The two judges concluded that even if a futility exception existed, "it would not apply where . . . a plaintiff settles his claim before allowing the administrative process to run its course . . ."

BUT one judge issued a powerful dissent. Judge Stranch held that Miguel's ADA claim for damages did not trigger IDEA's exhaustion requirement because it is a "classic ADA claim" alleging disability discrimination and "plainly does not seek IDEA relief."

Judge Stranch cited the 1998 Supreme Court decision in Honig v. Doe, 484 US 305 to support her position that the IDEA does include a futility exception to exhaustion and "every single one of [the Sixth Circuit's] sister circuits recognize that exception."

Judge Stranch emphasized that other courts of appeals have applied the futility exception when plaintiffs settle their IDEA claims. She concluded that the majority's holding ". . . is exactly the opposite of what Congress intended when it enacted Section 1415(l) to reaffirm the viability of the ADA as a separate vehicle for protecting children with disabilities." (Emphasis added)

Miguel Perez filed a request that the U.S. Supreme Court accept his case. He asserted that the Sixth Circuit ruling "conflicts with precedent from the First, Third, Ninth, and Tenth Circuits . . . [and] defies common sense."

"From 2004 to 2016, the district engaged in an ongoing practice of failing to provide Miguel with the auxiliary aids and services necessary for him to participate in and receive the benefits of Sturgis Public Schools and discriminated against Miguel solely because he is deaf."

"Because Sturgis's twelve years of severe neglect caused compensable pecuniary harm by dramatically limiting Miguel's vocational prospects and earning capacity, and by forcing Miguel to forego years of income during the high school years he had to redo . . . At a minimum, Miguel may seek compensatory damages for lost income."

The Supreme Court agreed to hear this case to answer two legal questions and to resolve a split between the Courts of Appeals.

(1) Whether, and in what circumstances, courts should excuse further exhaustion of the IDEA's administrative proceedings under Section 1415(l) when such proceedings would be futile.

(2) Whether Section 1415(l) requires exhaustion of a non-IDEA claim seeking money damages that are not available under the IDEA.

(OR paraphrased)
Does the Individuals with Disabilities Education Act require families who have settled their IDEA claims with a school district to exhaust all administrative proceedings under the IDEA before they can file a claim under other federal statutes, although doing so would be futile?

Are families who sue for monetary damages under the ADA or other federal disability laws required to comply with IDEA's requirements for exhaustion when damages are not allowed or available under IDEA?

When the Supreme Court issues a decision in Perez v. Sturgis, we expect it will clarify the Supreme Court's 2017 ruling in Fry. The decision may affect the "favorable public policy" of settlement agreements because Miguel and his parents settled their IDEA issues and because IDEA encourages settlements of parent-school disputes.

The facts in this article are from these legal documents.

The decision in Perez v. Sturgis from the U.S. Court of Appeals for the Sixth Circuit on June 25, 2021.

Link to Pete and Pam's impressions based on the Oral Argument including Pete's predictions as to the outcome. A decision is expected prior to July.

Above URL link is at: https://www.wrightslaw.com/blog/perez-v-sturgis-will-supreme-court-help-or-harm-students-with-disabilities/

Pleadings and Links to Decisions and Amicus Briefs below -

Amicus Brief of the Council of Parent Attorneys and Advocates, Inc. and National Federation for the Blind in Support of Petitioner (January 12, 2022)
https://www.wrightslaw.com/law/scotus/sturgis/2022.0112.brief.amicus.copaa.pdf

School District's Brief in Opposition to Cert (May 4, 2022)
https://www.wrightslaw.com/law/scotus/sturgis/2022.0504.sturgis.brf.in.opposition.to.cert.pdf

Brief for the United States as Amicus Curiae (August 24, 2022). https://www.wrightslaw.com/law/scotus/sturgis/2022.0824.brief.amicus.usdoe.usdoj.pdf